The Fundraisers of Fulbright Hall

Three alumni who created the first free end-to-end fundraising platform while at GW never lost sight of the end goal. Their company, Givebutter, helps charities raise $150 million each year and landed them on “Forbes”’ 30 under 30 list. 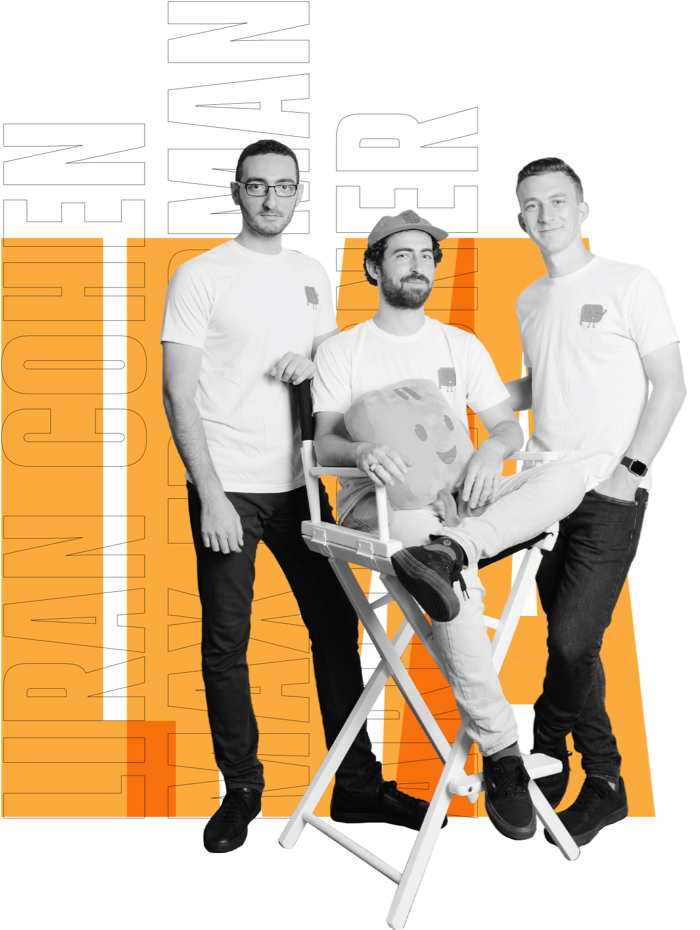 While George Washington University alumni Liran Cohen, B.S. ’18, M.S. ’19; Max Friedman, B.S. ’17; and Ari Krasner, B.A. ’18, were the star subjects of their “Forbes” profile naming them to its annual 30 under 30 list for social impact, it was their startup company’s mascot that perhaps had the best photo of the shoot. Mr. Butter, resembling a slice of his namesake and measuring the size of a bed pillow, was propped up on a high-top chair with a backrest that read, “Failure is an option.”

Mr. Butter and the company he represents exist because his creators took on that mentality.

Cohen, Friedman and Krasner started Givebutter, the world’s first free end-to-end fundraising platform, as GW students in 2016. The story seems too good to be true. The three met in college, concocted the business idea while living together in a residence hall and turned it into a company that now helps raise $150 million for charities each year. While all of that is indeed factual, achieving success was far from a linear process.

“I think a lot of our relationship was built on failure and seeing how we behave and respond to that failure and learn from it,” says Friedman, a GW School of Business computer science and finance graduate. “Co-founding a business, everyone always says, is a lot like dating. The relationship between founders is just so important, and I really value the time that we had to learn and become closer.”

The founding trio can probably relate—on a smaller scale—to Thomas Edison, whose first 1,000 ideas to create a light bulb didn’t come to fruition. But like Edison, all it took was for one idea to stick. Because of that fortitude, they changed the fundraising game just as Edison did the scope of electric power, and it all happened within the confines of Foggy Bottom.

The first domino fell when Friedman, then a sophomore, formed a startup club on campus. “A very meta thing to do as a future entrepreneur,” he jokes. Cohen, a computer science major, was one of the first attendees. Soon after, Friedman hatched an idea for an event discovery app. Cohen built the website as Friedman went to work on the app itself.

Later that school year, Friedman went to a Chabad GW event. While there, Cohen raced up to him and said, “You’ve got to meet this guy!” That was when Krasner entered the picture, and a duo became a trio.

“It was one of those things where we met each other, and then I think we basically just pulled our chairs aside and talked for hours, and we were fast friends,” Friedman says.

The universe seemed to confirm this quickly. Friedman had two roommates at an apartment on M Street, but they both went to study abroad for the year. Before spring semester, Cohen and Krasner, who were living together in a triple room in Fulbright Hall, suddenly had an opening. Friedman moved in, and the residence hall on H Street became an incubator for their project not quite finalized.

Along with the event discovery app, they tried their hands at other projects, including a viral charity sweepstakes, that just didn’t have the staying power. No matter what ultimately got them to the finish line, as far away as it may have seemed at times, they never wavered on their commitment to create something with a built-in social contract that helped make the world a better place.

“Giving back was a huge part of all of our lives growing up in the communities that we came from, and it was truly instilled in all of us from an early age,” says Krasner, an international affairs graduate from the Elliott School. “We were really excited about what we were building, and we really wanted to do something great with those values in mind.” Krasner hails from San Diego, while Cohen and Friedman grew up in New Jersey and New Hampshire, respectively.

When a January 2016 blizzard blanketed D.C. with nearly 20 inches of snow, the trio used the canceled classes to hunker down in their Fulbright Hall room and work on the project. They credit that storm as a breakthrough period.

“We wanted it to keep snowing out there,” says Friedman, who more than likely differed in opinion from other D.C. residents at the time.

Soon after, they got a call from a friend who needed help raising $13,000 to launch a food truck. In their market research, they studied how different nonprofits handled their donation forms and were disappointed in both the lack of engagement and hidden fees they were finding.

They found that millennials were active in volunteering but lacked representation when it came to donating online. They concluded that the giving experience was too transactional and not enough companies were transparent with fees, thus discouraging would-be donors from lending their financial support to worthy causes.

Then, it was time for their “light bulb” moment as the trio’s work from the previous two years all culminated.

They created an interactive experience with no contracts, subscriptions or hidden fees, essentially individualizing the giving process. The platform launched later that spring, with the final piece being a whiteboard naming session that lasted into the late hours of the night at the Science and Engineering Hall. Givebutter ultimately stuck, both the product and the name (butter was a more fun way to say better, they thought), and it incorporated ideas from other startups the three worked on that didn’t make it as far.

Oh, and their friend with aspirations of launching the nonprofit food truck? Thanks to Givebutter, he was able to raise that $13,000—in one day.

“Giving should be fun no matter how you do it, and when giving is fun, you want to keep doing it,” Friedman says. “Sometimes it’s not all about the data. It’s just about people helping people and having a good experience doing that. And that’s what we're all about.”

Word got out—“The Washington Post” even gave them some ink—and Givebutter kept stacking successful campaigns on top of another. But in spring 2017, they wheeled over a nail in the road that could have deflated the newfound company’s momentum.

At the time of the GW New Venture Competition (NVC), they had a refined product and felt confident going into the Office of Innovation and Entrepreneurship’s (OIE) crowning event. Here was a chance, they thought, to win valuable prize money and add another arrow in the arsenal of credibility by claiming the top prize at what has become the top university entrepreneurship competition in the country. Instead, they learned they would not be one of the four teams advancing to the finals. But once again, the trio used a setback as a springboard.

“We actually took that as another thing for us to prove everyone wrong,” Friedman says.

While the prize money for finalists escaped them, the Givebutter team cashed in on non-monetary benefits of the NVC and used the designated working space offered to build an even better Givebutter. It was especially helpful because, by that point, Friedman and Krasner were living with two other roommates in a studio apartment. Needless to say, having the open space in the WeWork Lab was much welcomed.

Friedman noted that finding mentors and maintaining relationships played huge roles in growing Givebutter, specifically shouting out Lex McCusker, a former OIE staff member who also served as the director of the GW Business Plan Competition. In addition to providing feedback, McCusker became one of the startup company’s biggest supporters, not to mention treating the trio to Bobby’s Burger Palace after work sessions.

“I think having people like that, who are lending an ear and really trying to connect you with valuable people and ultimately believe in you when you are nothing yet and trying to make it, is so important—particularly for aspiring entrepreneurs,” Friedman says.

The trio continued refining Givebutter while stockpiling both a network of resources and additional campaigns. Not only did GW bring them and their idea together, but they all stayed with it after graduation and have built it into one of the world’s most legitimate fundraising websites while creating a strong company culture.

Givebutter now employs 30 full-time people working remotely throughout the country—Friedman is based out of Boston, Cohen is in New York City and Krasner is in Los Angeles. The company recently launched the world’s first free donor-management solution with email and text messaging capabilities, and they have grown to a point where they are able to translate customer feedback into the product faster than ever before.

And most of all, hundreds of millions of dollars have landed in the hands of noteworthy causes such as Habitat for Humanity, Feed America, Special Olympics and thousands of other grassroot undertakings that distribute to those in need. All of that would have never happened had the Givebutter trio given up the first time something didn’t work or after a pitch contest didn’t turn out the way they hoped.

So, yes, Mr. Butter paid his dues and deserved his chance in the spotlight.