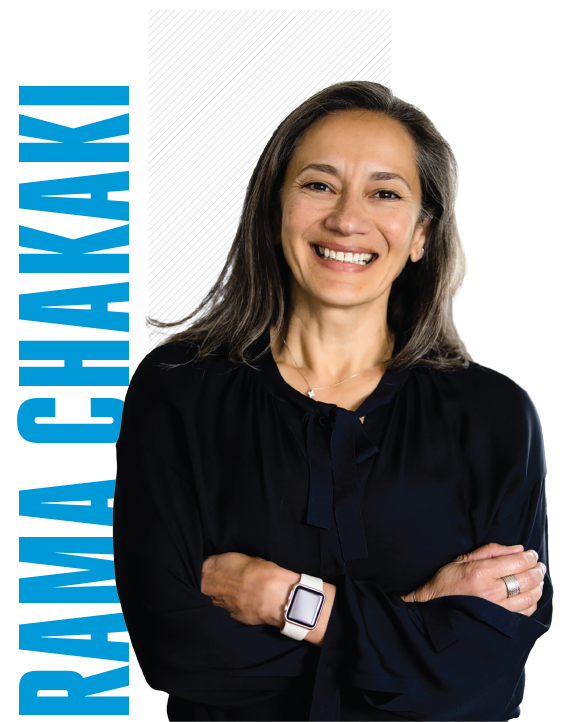 Rama Chakaki, B.S. ’90, M.S. ’96, has always been a supporter of the underdog. As a young child in Saudi Arabia, she would watch “Telematch,” a West German television series that consisted of silly games in which participants in elaborate costumes jumped across water or climbed rocks, either against the clock or as a race.

“I remember always rooting for the team that wasn’t winning, and that kind of became a theme in my life,” Chakaki says.

Today, Chakaki is COO of aixplain, a company that is “on a mission to make sure AI is accessible to all.” She is also a partner in Transform VC—a Silicon Valley venture capital firm investing in companies like aixplain that have a social impact—and co-founder of the VIP.fund, a nonprofit empowering marginalized and conflict-impacted youth.

“You can do great and make money, but you have to always think about who you’re leaving behind and how you can integrate them into your business model,” Chakaki says.

Chakaki, who was born in Syria but grew up in Saudi Arabia, attended a private girls’ school there from 2nd through 12th grade. After she graduated, her father moved the family to the United States, where Chakaki received both her bachelor’s degree in computer engineering in 1990 and her master’s in engineering management in 1996.

Chakaki’s experience at GW helped lay the foundation for her vision of being successful and doing good. Of particular importance to her was research professor Rachelle Heller, who became Chakaki’s adviser for graduate school and then a lifelong mentor.

“She always encouraged me to look at the connections between computer science and everything else in the world,” Chakaki says. “And she had me work with her on projects that were quite impactful in showing me how technology can really support social good.”

After graduation, Chakaki rose through the ranks at several software development and telecommunications companies before becoming COO at Eastnets, a global provider of compliance and payment solutions for the financial industry.

But after two years of working at Eastnets in Dubai—a locale known for its glamorous, luxurious lifestyle—Chakaki realized that most companies were either looking after their bottom line or involved in social impact but not both.

“I walked into the office one day and wanted something different,” Chakaki says, “and that’s when I started on this journey of finding out what that might look like.”

In 2005, Chakaki left the corporate world behind and set up the first social impact incubator in the Middle East, called Baraka Ventures. One of the projects in the portfolio that she’s particularly proud of is BarakaBits, a publishing platform telling positive stories from the Middle East.

Bolstered by BarakaBits’ success, Chakaki moved to Los Angeles, where she  could learn how to continue her success on a larger scale. As she continued to work on BarakaBits, she invested in two other social impact companies—AYA Animations and Mint + Laurel—and founded edSeed, an education crowdfunding platform that supports the higher education of youth impacted by conflict in Jordan, Lebanon and Turkey.

But it was during the COVID-19 pandemic that a former colleague of hers, Hassan Sawaf, started aixplain, one of the companies funded by Transform VC, co-founded by Raed Masri. Chakaki reached out to see if aixplain was the type of venture that could connect her twin passions of technology and social impact.

“Raed was very open to looking at how the two can intersect,” Chakaki says, “and how we can not only nurture billionaires that can be mindful about the concerns of others but incorporate environmental and social concerns into their business plan and bottom line.”

To Chakaki’s delight, this has been a milestone year for Transform VC. In addition to her own company, aixplain, Transform VC has six companies in its portfolio that have now hit the unicorn mark—a startup with a valuation that exceeds $1 billion—three of which are Middle Eastern. Additionally, two companies—though not unicorns yet—founded by women were part of Transform VC’s most recent cohort of funded companies in 2022.

“Transform VC is obviously part of the DNA of Silicon Valley,” Chakaki said, “but we feel that we are in a very privileged place—so let’s extend that privilege to people that are underdogs or dismissed by others.”

Chakaki is thrilled that she has found a way to help companies mind the triple bottom line of profit, people and planet at this stage in her career. At the same time, she is able to nourish her own triple bottom line of social impact, tech investing and—perhaps most important to her—education, through her nonprofit edSeed.

“With an education, these refugees gain financial independence and support themselves and their communities,” she says.

When civil war broke out in Syria in 2011, over 9 million Syrians were displaced, among them many university students who had access to free education in Syria but who now found themselves unable to continue in host countries where education is either too expensive or, in some cases, unavailable to Syrians.

One such student featured on edSeed is Walaa Al-Ten from Syria, who arrived at a refugee camp in Jordan in 2014. She is currently enrolled at Lebanese International University (LIU) for an undergraduate degree in biomedical sciences.

Her residency status prevents her from enrolling in public universities there, so the only way for her to get her degree currently is through LIU.

Through aixplain, Chakaki has been able to have a direct involvement in education by bringing in interns from refugee camps who are interested in learning AI. While there, the interns get to work on what is called “human in the loop” projects, where they’re actually creating the data that trains the AI algorithms.

“By helping them get a practical application of AI, they have a leg up getting jobs in AI in the future,” Chakaki says. “But then they can also use that knowledge to create AI that serves their community locally, and that helps them navigate the unstructured slums that are refugee camps.

“It would truly be a glory moment for me if one of the refugees I work with today actually becomes one of our mindful billionaires,” Chakaki says.