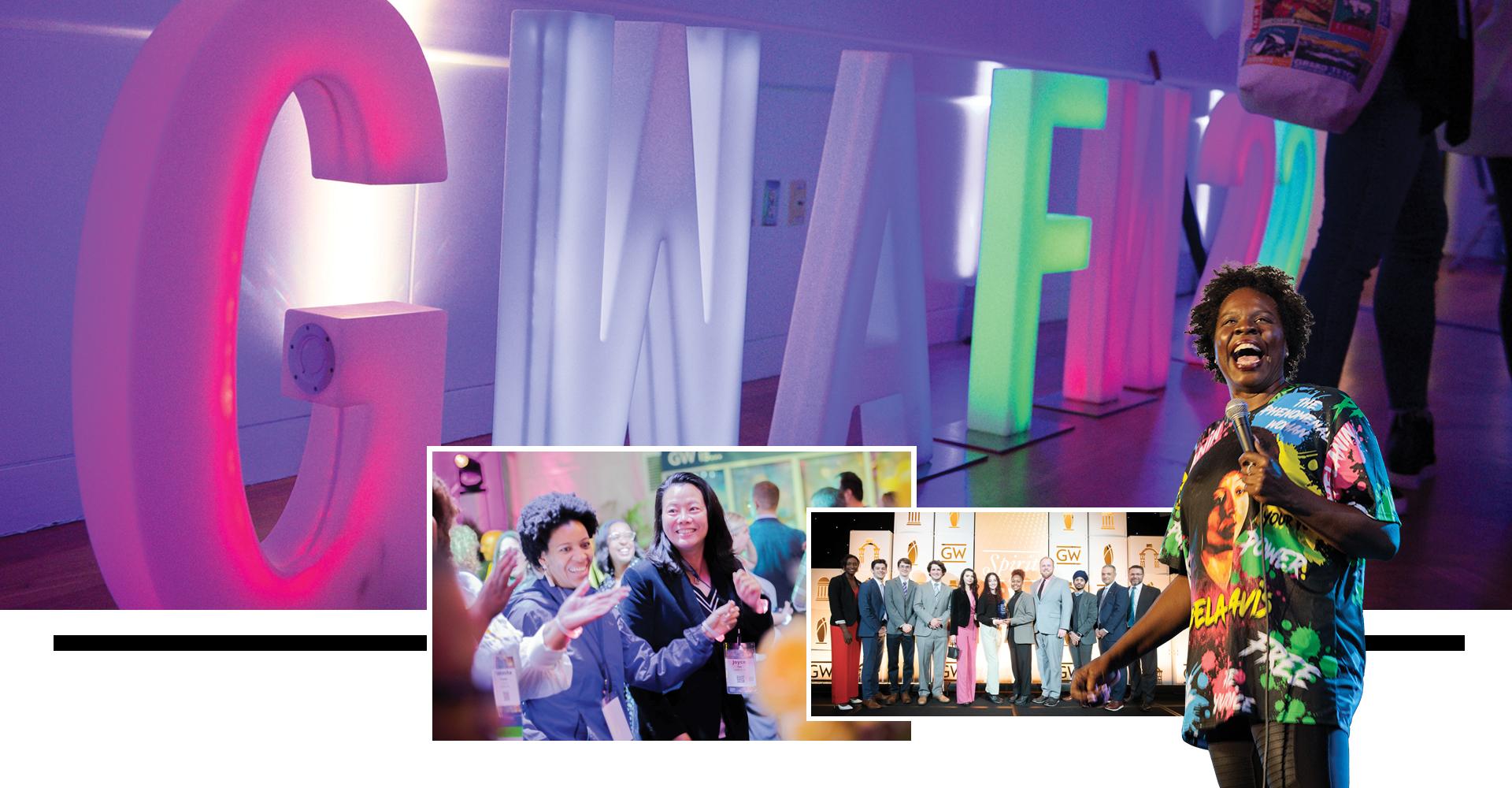 The GW community gathered to celebrate and reconnect during Alumni & Families Weekend 2022.

Twin siblings Adrienne and Nathan Williams never would have guessed a pit stop on the way to their home in Syracuse, N.Y., from a family wedding in North Carolina would be so consequential, but they are forever grateful for the detour in the route.

The two were high school students at the time when their family veered off the Beltway to Washington, D.C., where they toured the George Washington University together. Adrienne and Nathan shared everything in life up to that point, and they knew early on during their tour that they’d also be sharing the same university as they fell in love with the campus.

Nearly a decade and a half later, it remains an all-time great pit stop, as the two class of 2010 graduates return whenever they can to relive some of the best, most formative years of their lives while sharing their GW pride with fellow alumni and current students.

They came together with the GW community over Alumni & Families Weekend, Sept. 30 to Oct. 2, to celebrate what makes the university special by reconnecting, checking out new and improved upgrades to the university, and participating in campus events and activities.

“We didn’t really know it at the time, but this university has meant the world to us,” said Nathan Williams, B.S. ’10, an economics graduate from the Columbian College of Arts and Sciences who now works as a financial specialist at TIAA in D.C. He and Adrienne, B.A. ’10, attended the All-Alumni Party Friday night at Potomac Square. 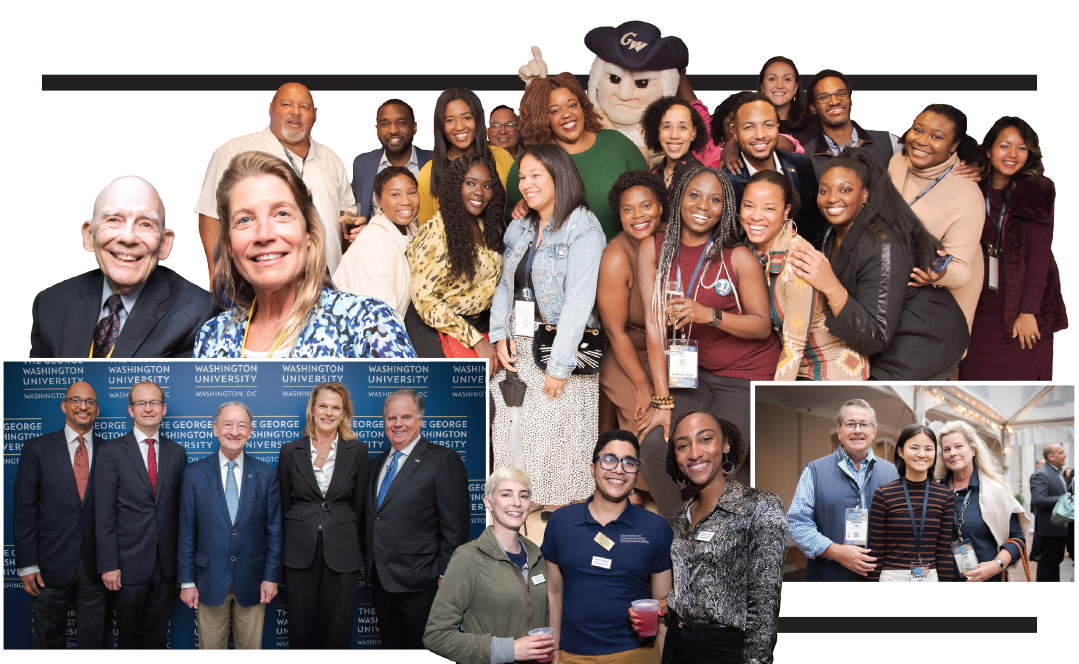 GW alumni, families and friends gathered for reunions and fun-filled festivities as the annual Alumni & Families Weekend returned to campus for the first time since 2019.

“We didn’t really know it at the time, but this university has meant the world to us.”

Despite the rainy conditions, events were well-attended throughout the weekend. Potomac Square and the Grand Ballroom of the University Student Center, which housed the Weekend Welcome Gathering for parents and students, were some of the liveliest venues in the early parts of Friday. Both events had deejays, flashing lights and laughter echoing off the walls.

Those who preferred a more laid-back setting had plenty of options too. The Vern Harvest at the Mount Vernon Campus on Saturday offered a variety of fall activities, including pumpkin paintings, caricature drawings, and apple cider and doughnut samples. The newly renovated Thurston Hall was bustling with people exploring its modernized community spaces and amenities during open houses. Weekend attendees could also see the GW Documentary Film Series, which included the premieres of four short films: “Gelman Library and Favorite Study Spots,” “GW’s Global Women’s Institute,” “D.C. as a Classroom” and “Commencement on the National Mall.” Two additional films, “To Bigotry, No Sanction” and “GW Open Doors,” were also shown. Five-, 10-, and 20-year reunions were held on Saturday night for the classes of 2017, 2012 and 2002.

On Saturday evening, the university honored alumni and supporters of the university at the Spirit of GW Awards for their accomplishments and contributions that have elevated the standards of excellence and generosity for the GW community.

Aicha Evans, B.S. ’96, received the Distinguished Alumni Award. Evans is currently the CEO of Zoox, a subsidiary of Amazon that develops autonomous vehicles, and has been recognized in Forbes’ 50 over 50 and Fortune’s Nine Powerful Women to Watch lists.

John G. Samuel, M.B.A. ’14, received the Recent Alumni Achievement Award. Samuel is the co-founder and CEO of Ablr, a company that helps organizations be more inclusive by removing barriers that hinder people with disabilities.

Aaron R. Kwittken, B.A. ’92, was recognized with the Outstanding Service Award. Kwittken is the founder and CEO of PRophet, an artificial-intelligence-driven-data-as-a-service platform. He has made numerous contributions to the School of Media and Public Affairs, including stipends to offset unpaid or underpaid internships for students.

The GW Philanthropy Award went to the A. James & Alice B. Clark Foundation for its extraordinary and enduring support. GW is among 11 university partners in the United States with a Clark Scholarship program. At GW, this scholarship has supported more than 100 students. A. James Clark was a trustee emeritus, honorary degree recipient and longtime supporter of GW.

President Mark Wrighton, who was present at many events, said at the All-Alumni Party on Friday night that the weekend offered a glimpse of all the things happening on campus while simultaneously celebrating the legacy of GW alumni.

“This is a great institution with wonderful, creative, dedicated people who are making a difference in the world,” Wrighton said.

Wrighton also shared the university’s commitment to enhancing the student experience, pointing to the momentum of the Open Doors: The Centuries Initiative for Scholarships and the continuation of Only at GW experiences.

Alumni visiting for the weekend looked back at their own only-at-GW opportunities, many of which were centered around civic engagement and public service, while living at the epicenter of democracy.

Former roommates Lynette le Mat, B.A. ’72, and Peggy Sulvetta, B.A. ’72, who were celebrating their 50-year reunion, remembered how their time at GW coincided with the Vietnam War. Thurston Hall, which is where they lived, is now a state-of-the-art residence facility. But when they were undergraduates, it housed anti-war demonstrators who descended upon D.C. to express their opposition to military actions in Southeast Asia.

A half century earlier, they were two first-year students from Connecticut randomly paired together, and on Saturday, toured their old stomping grounds, reminiscing in Thurston Hall’s courtyard terrace.

“We haven’t seen each other in a long time, but through the years we’ve kept it in touch,” said le Mat. “The friendship started at GW.”

The Williams twins were also enamored by the city while at GW, and one of their favorite memories was visiting the lit-up Lincoln Memorial with friends the night before Commencement on the National Mall.

“That resonated with me, and it still resonates with me,” Nathan said. “You’re in the capital city of the United States of America, whether it’s going to inauguration or this week watching Lizzo play James Madison’s flute.”

“Or protesting in the street,” Adrienne, an international affairs graduate who now works at the nonprofit Student Achievement Partner, interjected.

“Exactly!” Nathan, a men’s basketball season ticket holder, responded. “No matter what it is, this is where things are happening, and I just feel so proud to be here.”

While some gathered to celebrate the culmination of their GW journeys, others are just beginning theirs and showed off their new experiences and D.C. settings to their families visiting over the weekend.

Even though Albert Schenn and Nancy Shiue moved their daughter, first-year student Rachel Moon, to campus from the Dallas area just over a month ago, a lot has already changed as Moon just recently joined the GW Hatchet student newspaper.

“The best part of being a parent is just watching her integrate into the local community,” Schenn said while attending the Vern Harvest with his wife and daughter.

While everyone comes from a different starting point, GW is the destination that binds together more than 200 years of life experiences and professional development and achievement, all of which were celebrated over Alumni & Families Weekend.

As Adrienne Williams said: “It is a place that just feels like home.”